Consumer Spending in November and December could grow as much as 11,5% and hit an all-time high

The times we are living in are far from «normal.» But we cannot blame an invisible virus for all that is happening right now. The question for retailers now is how this holiday season will look like?

Online spending on Black Friday 2021 decreased for the first time ever. According to Adobe Analytics, online shoppers spent a total of $8,9 billion, and that is down a little bit from last year’s $9 billion.

It can be many reasons for the dip, but Adobe believes it can be caused by an uptick in early spending, as some stores started sales and promotions as early as October. Shoppers are also being strategic in their gift shopping, buying much earlier in the season and being flexible about when they shop to make sure they get the best deals.

Black Friday traffic in stores also dropped -28,3% from pre-pandemic levels. Cyber Monday did also have a bad day and dropped for the first time ever. Cyber Monday online sales drop -1,4% from last year to $10,7 billion.

Adobe expects the entire holiday season will see record-breaking e-commerce activity, as shoppers spread out their dollars over more days. Adobe anticipates digital sales from November 1st, to December 31st will hit $207 billion which would represent record gains of 10%.

FedEx forecasts Monday will be one of the highest volume e-commerce days of the 2021 holiday season as it prepares to deliver an estimated 100 million more packages than it did from Black Friday to Christmas in 2019.

According to National Retail Federation, the holiday season will be fine. Spending in November and December could grow as much as 11,5% compared with the same period a year ago. This is much higher than many retail analysts themselves had predicted.

Sales in November and December can hit an all-time high of between $834,4 billion and $859 billion. In other words; we`re on the path for a record holiday season. Omicron can destroy the holiday season, but it can also help.

Instead of taking a trip by plane to other places, consumers will spend their money on Target or Macy`s. That will boost consumer demand, helped by higher wages and inflation. A lockdown will increase online sales and put more pressure on FedEx. People want packages no matter what.

Just take a look at Black Friday 2020 that totaled $9 billion on U.S retail sites, according to Adobe Analytics. That`s a 22 percent increase from last year. On the other side; U.S store visits dropped by 52 percent in the same period.

The distinctions between Black Friday and Cyber Monday have become increasingly blurred, and I look forward to seeing the numbers from Cyber Monday. Not only that. Take a look at the Thanksgiving store traffic. It dropped 95 percent. Wow.

Black Friday online sales reached a new record high as pandemic-wary Americans filled virtual carts instead of real ones. Traffic to physical stores plummeted, but Black Friday is still one of the biggest in-person shopping days in the U.S this year.

People love days like this; Thanksgiving, Black Friday and Cyber Monday. So far, Black Friday has been very chaotic, but this time it was much better. This is very important days for all the retailers, So, how is it going for them this time?

Smart people buy products on days like this, and if you are one those who didn`t use your card last week, you have a few hours to do it today. On Cyber Monday. And if you do, you will not be alone to do it.

Last year, Cyber Monday sales hit $7,9 billion, but today it is estimated to hit $9,4 billion, according to Adobe Analytics. If this holds, it will be a jump of 18,9% from last year.

Shoppers do not go to the stores on days like this. It`s all about online sales. Not only that. Extreme weather will also force some people to shop online, and shoppers are expected to spend $11 million per minute during the peak hour of 11:00 p.m ET.

The reason why the lines were thiny on Black Friday is the retailers early sales start. Retailers began sales in early November, so people didn`t wait until Black Friday or Cyber Monday this time. This also means less chaos.

In fact, Black Friday was predicted to be the busiest shopping day of the year in the U.S for shoppers to head out to stores, but people made it online on their shopping carts. Online spending on Black Friday hit a record of $5,4 billion, and that is up 22,3% from last year.

The winners in this game so far is Target, Best Buy and Walmart, while the department stores are still a little bit slower. Both, Target and Walmart saw bigger jumps in online customer spending than Amazon during the first two weeks of November.

Nordstrom had the biggest jump in online sales. Up 60%. Second is Walmart with a 53% jump, while Amazon on the third place jumped 49%, and that`s huge for an already Giant in online sales if you ask me.

Buy online and pick up in stores as well as curbside pickup services since November 1 have seen a 43,2% growth since 2018, according to Adobe. Shoppers have so far spent a record $72,1 billion online between November 1 and December 1. Shoppers are also on track to hit $143,7 billion in online sales for the full holiday season.

One of the most popular products on days like this is a Smartphone. So, it`s headed for a new online spending record next year. Or…..

Cyber Monday can be the largest online sales day in history

The Dow is up a whopping 373 pints amid expectations for a historic Cyber Monday. Nasdaq jumped 2,30 percent and ended at 6,677,26. I talked about the declining SPDR S&P Retail ETF on Friday last week, but it bounced back on Monday, up nearly 2 percent. 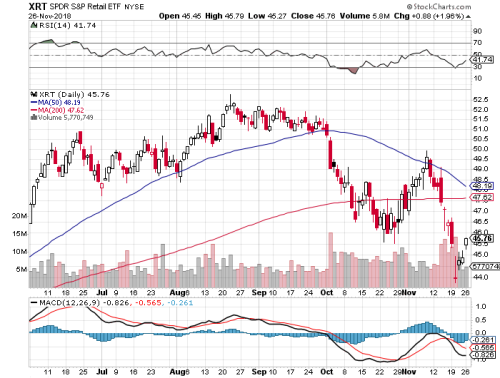 The shares of retailers rose on Monday after last week`s sell off. According to Adobe analytics, Cyber Monday spending is seen reaching an all-time high of $7,25 billion in the United States, and that will mark a historic day for online shopping.

Thanksgiving, Black Friday, Cyber Monday and the coming Holiday Season can help to lift retailers from the declining trend we have seen since October. The third-quarter reporting season is also over, with nearly 97 percent of companies in the S&P 500 having reported. 78 percent of the companies beat analyst expectations.

Cyber Monday was wild last year, but it jumped nearly 100 percent from 2016 to 2017. This year, the online sale is expected to jump over 10 percent. $7,25 billion in sales will be a new record for online sales in a single day.

Trade tensions will come back later on this week as President Donald Trump is planning to meet with Chinese President Xi Jinping at a multilateral Summit in Argentina on Friday and Saturday, with tariff escalation between the world`s largest economies on the line.

Investors are waiting for the G20 Summit convening in Buenos Aires on Friday and Saturday. In the mean time, be prepared for what can be the largest online sales day in history; Cyber Monday.

The U.S Black Friday is on track for “blowout” but the Retailer ETF is declining

The biggest shopping day of the year has been the black friday, but that belong to the past. This has changed in the past few years and its a reason for that. Its no longer a black friday single day, but a week-long affair.

Amazon is still on top of the most popular stores for Black Friday. While Amazon continue to rule the online world, WalMart remains undisputed king of the Black Friday. Next on the list is Target, BestBuy, Macys and Kohls to name a few.

What people are looking for is Apples iPhones, Macs, iPads and other devices, but Apple is not expected to give away any great deals. Gift cards up to $300 will therefore be given by AT&T, T-Mobile, Verizon and Sprint.

Its also expected to see WalMart, BestBuy, Target and Amazon to offer the cheapest TVs, Laptops and Video Games. Google is expected to respond with deals on Nest, Nest Camera, Nest Doorbell and Google assistant.

A quick look at XRT Retail ETF tells us a strange story which is the opposite of last year. The value is declining and it seems to have peaked in October this year. I will continue to follow the retailers and their business.