The United States are growing faster than China

The world`s biggest economy is the United States followed by China, and sooner or later, China will replace the locomotive and be the biggest economy in the world. You can delay it, but it will happen in this century anyway.

They are both in conflict with each other with tariff tensions and a trade war. A strategy that is bad for both of them in the long run. The U.S is waiting for China to come to the table and make a fair deal. Today is the first day of talks to renegotiate the trade dispute between them. A deal that President Donald Trump repudiated. 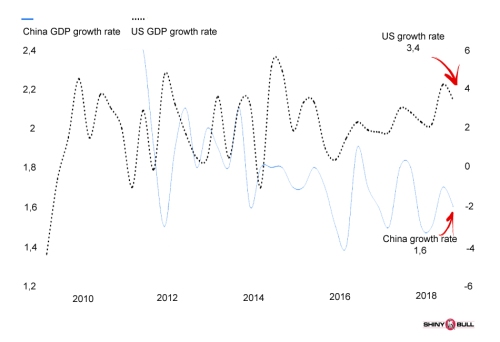 Take a look at the chart above. Surprisingly, the U.S is more productive than China. Twice as much. The US economy advanced an annualized 3,4 percent on quarter in the third quarter of 2018 while the Chinese economy grew by “only” 1,6 percent quarter-on-quarter in the three months to September last year.

The Chinese economy is slowing and this has been going on for a while. But it`s not because of the trade war. China obviously have some problems and the China-U.S tension is one of them, but this is not the first time China and the U.S are in conflict with each other.

Deng Xiaoping and President Jimmy Carter signed a historic accord in 1979 and then reversed decades of China-U.S tension. Deng Xiaoping was a Chinese revolutionary and veteran of the Communist Party and he was eager to adopt capitalist methods and reforms in order to stimulate economic growth and restore confidence in the party.

Today, China has embraced capitalism but remains Leninist at heart. The founder of the Soviet Union, and his Bolshevik revolution, Vladimir Lenin changed China`s economic and political landscape.

Lenins Russian revolution in 1917 have a causal relationship with the birth of Chinas Communist Party in 1921 and the founding of the People`s Republic of China in 1949. As Mao Zedong once said: “The salvoes of the October revolution brought Marxism-Leninism to China.”

Now, China has changed dramatically since Deng Xiaopings free-market reforms and Maos terrifying Leninist experiment in utopia. Now, China is the world`s second largest economy. 70 percent of the “socialist” economy is privately owned and nobody have more billionaires than China right now.

China is more a Leninist capitalist state than a Marxist socialist one. 800 million people in the middle class has jumped on the consumerism train in only a couple of decades under the stewardship of communist totalitarianism. Leninism`s lasting legacy.

On the other side, China has a debt crisis and a real estate bubble, so the question is; when will China collapse, and will it cause a global crisis? China is declining and it will continue to do so. Lending money to Kenya or Venezuela to name a few, are putting them all in a debt trap and it remain to see that Beijing can afford it. I`m in doubt.

Xi Jinping and his leaders know that they are in a very weak position, so they have to come to the table and make a deal with the U.S.

The stock market is in a correction territory at the moment. Investors have priced in two rate hikes this year and some U.S-China tension fear, but Trump reports “Big Progress” in trade talks with China were top trained negotiators came to the table earlier today.