30th anniversary of the 1989 Tiananmen Square protests in China

Tiananmen Square Massacre on June 4th, 1989 remain as one of the most sensitive and most widely censored topics in China ever. Its memory is also widely associated with questioning the legitimacy of the Communist Party rule.

The Tiananmen Square protests were a student-led demonstration in Beijing in mid-1989, and it refers to the popular national movement inspired by the Beijing protests during that period, sometimes called the `89 Democracy Movement. Many of us can clearly remember the man in front of the tank. 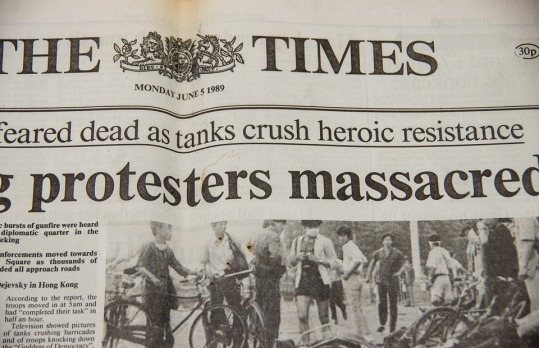 A lot of students and many business people protested against the Communist Party because they wanted Democracy, and not a Communist, totalitarian and authoritarian Party. But the political elite didn`t listen to the people.

The protesters were forcibly suppressed after the government declared martial law and sent in the military to occupy central parts of Beijing in what became known as the Tiananmen Square Massacre.

Troops with assault rifles and tanks fired at the demonstrators trying to block the military`s advance towards Tiananmen Square. Estimates of the death toll ary from several hundres to over thousands.

Peaceful demonstrators were being labeled counter revolutionaries and terrorists who can be arrested, beaten and even killed by authorities. Dong had declared war and he expected the Chinese people to obey him. To fear him and to attack the students.

On April 26, 1989, Dongs opposition to the Democracy Movement was reprinted as an editorial in the Peoples Daily, and it was titlled; «The necessity for clear stand against turmoil.»

This is not an ordinary student movement, Dong complained. This is a well-planned plot whose real aim is to reject the Chinese Communist Party. The purpose of the students is to poison people`s minds. The whole nation must resolutely stop and oppose the students.

The protesters were not counter revolutionaries. They just wanted a reform. Not a revolution. They wanted to be allowed to exercise experience basic human rights including freedom of speech and freedom of assembly.

For all this the protesters were accused of commiting crimes.

The political elite in the Communist Party were shocked, frightened and confused. Dong expected the people to fear him and to obey him. Instead, they humiliated him. On April 27, 150, 000 protesters and 500,000 Beijing citizens took to the streets in protest against the government.

The government was shocked and ordered the students to return to their classes at once, but the students responded by demanding Democracy. Freedom of Speech. The end of corruption, and asking; “Why cant the peoples Prime Minister come out to meet with the people?”

The Movement escaleted and millions of people joined the students and supported them. The government`s efforts to stop the demonstrators have failed miserably. Ordinarly people had sided with the students.

«The Press must tell the truth» some of the posters said. «Full of lies» and.«Lying to the people,» «freedom of speech», «freedom of the press» is another one. Tens of thousands of students were crowding the streets, singing, chanting and cheering. They were singing;

Today we are blossoming

Tomorrow we are pillars of society

The Communist Party started Martial Law and crushed the Democracy Movement by military forces. China`s paramount leader Deng Xiaoping mobilized as many as 300,000 troops to Beijing.

They used the People`s Liberation Army to attack the unarmed peaceful Chinese people. It ended in a carnage and hundreds to thousands were killed and thousands wounded.

Protest leaders and pro-democracy activists was later exiled or imprisoned. Rioters was charged with violent crimes and some were executed in the following months. Some protesters were tortured. Western economic sanctions and arms embargoes on the People`s Republic of China followed.

The suppression on June 4 marked the end of a period of relative press freedom in China and media workers. Both foreign and domestic, faced hightened restrictions and punishment in the aftermath of the crackdown.

State media reports in the immediate aftermath were sympathetic to the students. As a result, those respnsible were all later removed from their posts. Some reporters were fired because they displayed sad emotions.

Editors and other staff at People`s Daily, including director Qian Liren and Editor-in-Chief Tan Wenrui, were also sacked because of reports in the paper which were sympathetic towards protesters. Several editors were arrested.

The Communist Party of China forbids discussion of the Tiananmen Square protests, and has taken measures to block or censor related information. Textbooks have little, if any, information about the protests. Film and books are banned and many newspapers shut down.

Access to media and internet resources on the subject are restricted or blocked by censors.

The state`s job of putting down dissent is made easier and more complete due to the increasingly widespread surveillance ranging from use of facial recognition technologgy, to cameras, to real ID registration, monitoring social media use, and sanctions for behaviour not acceptable to the liberal Communist regime in China.

Many countries in Europe use China as a role model.