The bull market continues and the S&P 500 went up in April, May, June and July. So, «Sell in May and go away» would be a disaster for any investor on this planet this year. Just like it was in the 50`s under president Eisenhower. This is not a normal situation in the midterm election.

As you can see from the chart below, similar situation happened in 1954 and 1958. Apple Inc is a big contributor to the bullish market right now, and it just hit a $1 trillion market cap. A milestone we have never seen before for a U.S publicly traded company. 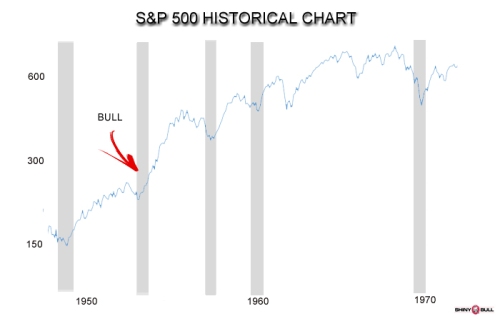 Not only Apple Inc are hitting milestones. Many of the stock exchanges around the world are also hitting now all-time highs. But how expensive are the U.S stocks? The P/E ratio of the S&P 500 has fluctuated from a low of around 6x in 1949 to over 120x in 2009.

The long-term average P/E for the S&P 500 is around 15x, meaning that the stocks that make up the index collectively command a premium 15 times greater than their weighted average earnings.

The trailing P/E ration will change as the price of a company`s stock moves, since earnings are only released each quarter while stocks trade day in and day out. Current S&P 500 PE ratio are down -0,13 percent on Thursday 2 August 2018 (based on trailing twelve month) to 24,34.

Some investors prefer forward P/E which is similar to the trailing P/E, but uses estimates of projected future earnings, typically forecast over the next twelve months. If the forward P/E ratio is lower than the trailing P/E ratio, it means analysts are expecting earnings to increase. If it is higher, analysts expect a decrease in earnings.

These measures are often used when trying to gauge the overall value of a stock index, such as the S&P 500 since these longer term measures can compensate for changes in the business cycle.

A business cycle describes the rise and fall in production output of goods and services in an economy. Business cycles are generally measured using rise and fall in real inflation-adjusted GDP, which includes output from the household and nonprofit sector and the government sector, as well as business output.

Output cycle is therefore a better description of what is measured. The business or output cycle should not be confused with market cycles, measured using broad stock market indices; or the debt cycle, referring to the rise and fall in household and government debt.