Nasdaq had a bad day yesterday and slid -1,89%, but the major index is the only one that is in positive territory for the year. One of the biggest losers on Nasdaq yesterday was Microsoft. Down -9,25%.

Microsoft reported earnings of 72 cents per share on $26,47 billion in revenue for the second fiscal quarter, but the revenue was better than analysts estimations. The negative is the weaker than expected Windows non-Pro revenues which is down -13% YoY, and the commercial license declined 2%. 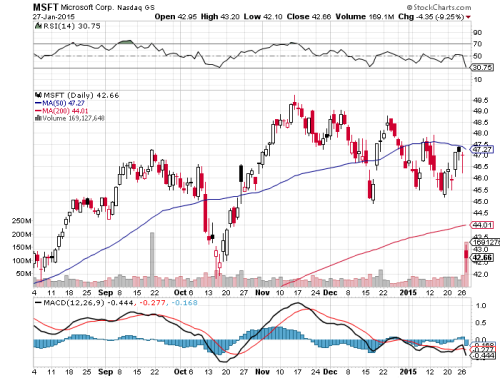 CEO Satya Nadella said it doesn`t take much longer time to successfully transition from a licensing sales focused firm into a software as a service firm. Microsoft`s cloud business doubled and came in on $5,5 billion i sales. Xbox sales fell to 6,6 million units (from 7,4 million) in sales.

Caterpillar was another big company that slid yesterday. Down -7,18%. The company delivered a shockingly weak outlook for this year and investors got scared. It seems like Caterpillar is in big trouble.

Analysts expected earnings of $1,55 a share but it fell about 20%, landing on $1,23 a share. Its Q4 operating profit slumped 27% YoY. Lower oil prices is negative for their construction business. Caterpillar lowered its 2015 sales expectations for mining and construction equipment, and that was not music in investors ears.

Good news is coming later today. First of all; Alibaba is coming out with the second report as a public company. The Chinese e-commerce giant is expected to post a quarter of tremendous growth. EPS is expected to grow 39% YoY! It`s also expected a massive 48% improvement in YoY revenue!

It is expected to see Tmall and Taobao to deliver strong revenue momentum on the back of higher e-commerce penetration in China. Alibaba has an ongoing international expansion and the stock is up 3,3% in three months.

ATH is 119,15 which is from 10 November last year. The stock was down -1,01% yesterday, and there are some short interest in the stock right now. The opening trade is now $102,94. 52-week low is registered as $82,81. Outstanding shares are 2,465,006,000. The stock is priced richly with Alibaba`s market cap now over $250 billion, but the market is looking for huge surging numbers which could validate the company`S valuation.

Yahoo! Is set for a rally today, trading up about 8% AHT. The company is spinning off Yahoo`s $39 billion stake in Alibaba Group Holding. The anticipated decision announced yesterday will enable Yahoo to avoid paying billions of dollars in future taxes.

A newly formed entity called SpinCo will inherit ownership of the company`s 384 million shares in China`s Alibaba Group Holding when the tax-free spinoff is completed toward the end 2015. Owner of Yahoo shares will receive stocks in SpinCo, which is designed as an investment company.

The old giant is struggling to grow and the firm earned $166 million, or 17 cents per share. Down -52% from the same periode last year. Yahoo`s revenue dipped 1% to $1,25 billion, and investments in Alibaba and Yahoo Japan is the main reason Yahoo`s stock has more than trippled last years.

They have a 36 stake in Yahoo Japan, worth about $7 billion. The Alibaba investment is worth far more than their own online services, and their competitors like Facebook and Google have grabbed a big piece of the digital marketing budget.