The next HOT stocks

When Facebook (fb) went to the stock exchange may 17 last year it plummet and had a huge problem from day one. In june this year, the stock was worth only $24 a share. Since june fb has skyrocket! Right now the stock is just below $50. What a bull! A shiny bull!

It`s not the only ecommerce stock with great success. What about Google, and what about Apple? I love them both. You already know their success story, but is there more to come? Yes, it is. I will keep an eye on two stock right now. Twitter and Alibaba is the next big thing.

Alibaba is a huge company from China with great success with their ecommerce business. The Alibaba IPO will be a much much larger deal than Twitter. The market value of the Twitter IPO is expected to be around $15 billion, while Alibaba is expectet to be around $100 billion. The Facebook deal was estimated to be $104 billion.

Alibaba include Tmall.com and Taobao Marketplace, and their profit in the first quarter this year rised to $668,7 million. Last year the number was $220,5 million in the same periode. They increased their quarterly revenue by 72 percent which is $1,38 billion.

Alibaba will help Yahoo too. The valuation of $100 billion in Alibaba should be a great deal for Yahoo (YHOO) who have a nice 24% stake in the ecommerce giant Alibaba. But relax. It`s too early to even think about buying IPO stocks now, because it`s just in an early prosess.

It`s not gonna be this year. If so, it will be at the end of 2013. Probably early next year, because Alibaba is trying to avoid certain regulations. Hong Kong Exchange does not allow Jack Ma (founder and the executive chairman of Alibaba.) to have dual shareholder voting classes, but NYSE does. In addition, they have not yet selected lead bankers, nor an exchange.

Dual-class and related share structures are permitted in the United States and on NYSE, but not in China and on the Hong Kong exchange. Both Google and Facebook have dual-class listings. It gives the owners of the company greater say on how the company is driven.

If Alibaba chose New York, it will be a setback for the Hong Kong Exchange, which is ranked as the worlds largest market for IPO from 2009 to 2011. Twitter and Alibaba is two secrets I will look for now.

This is stocks you need to follow in the future, because most of the stocks in the US is too high now. Investors will not earn much the next years, but they will not lose much eighter, and the market will probably go sideways for years to come. That`s why I say stockpicking is very important now. News to follow today: Unemployment Claims & Final GDP at 8:30am, Pending Home Sales at 10:00am.

European markets, commodities and the overseas market is the markets I will follow the next years to come. It`s much better to be in those markets than ending up beeing wiped out in a huge correction. I don`t think it is a vicios bear market in the US, but it`s not a bull market either. Look for the right quality stocks! Take a look at the Facebook (fb) stock below.

What a nice bull! A shiny bull! 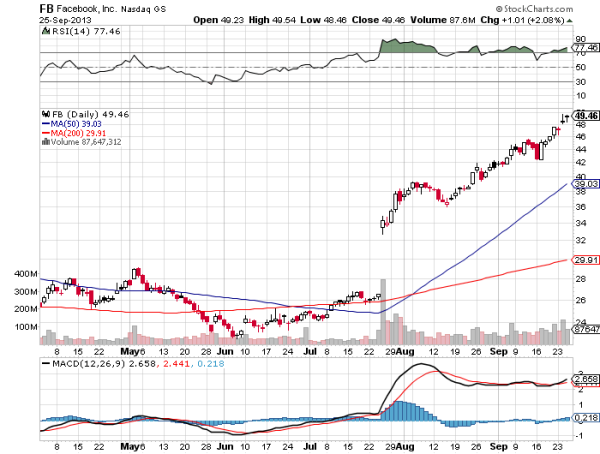