In my recent article I talked about Foxconn and their plans to go public a week ago, and more Chinese companies are on the way, One of them is Xiaomi, and their IPO is the biggest IPO so far in 2018 which is good for Hong Kong. 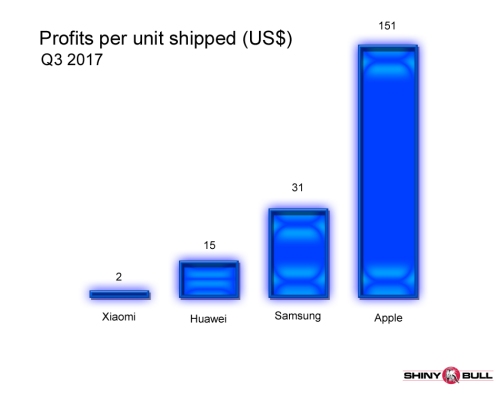 (Xiaomi`s profit is “only” $2, but their biggest market is India)

Hong Kong is on the way to be the destination of choice for global companies seeking to raise capital. Hong Kong marks the 21st anniversary of the citys return to Chinese sovereignty on July 1, and Xiaomis IPO can be a great birthday present to Hong Kong.

Xiaomi went from a start-up to surpass $16 billion in seven years, and their founder Lei Jun decided to make a smartphone brand selling handsets at “honest” prices. Eight years later, Lei Jun and the seven other co-founders have made a company that wants to challenge the global industry dominance by Apple, Samsung and Huawei.

Xiaomi are the cheapest smartphone on the market with the biggest market share in India. About 70 percent of their 2017 sales of 114,6 billion yuan came from smartpones, but there is a huge difference between Xiaomi and Apple.

Lei Juns profit from his low-budget price smartphone is "only" $2 per handset. Tim Cooks margin is between $151 and $250 on each iPhone.

Xiaomi more than doubled its overseas shipments to 27 million handsets in 2017. Its revenue skyrocketed to 32,1 billion yuan. There is no doubt that the global market is where their ambitions lie, and this is globalization at its best.

Xiaomi do not only have a big potential with its smartphones but also from smart devices, better known as the Internet of Things (IoT). Industry revenue may balloon every year at a 13,3 percent compounded growth rate to $6,2 billion by 2021, according to IDC.

Their innovative products will make a tremendous change in every industry.

Former communist China are on the way up. This IPO will make even more rich people in China. Founder Lei Jun and his co-founders will be rich after the IPO. Not only that. 56 of the earliest employees pulled together $11 million to invest in the start-up. Today, they are the lucky 56.

Their stake in Xiaomi may soon be worth about $1 billion to $3 billion, depending on the stock sale. That works out to $36 million each at the midpoint.