On October 1st, 2013, I wrote an article with the headline «Government shutdown». It was the first shutdown is 17 years. 800,000 federal employees was out of work that day, and millions of people was working without pay. Why?

USA didn`t have enough money to pay all of it`s bills.

Is this gonna happen again next week? According to Business Insider, the odds of a shutdown by the federal government have plummeted with the stunning resignation of House Speaker John Boehner, who sacrificed his speakership to avoid a shutdown.

If everything goes well next week, the government will be funded through December 11. The U.S has hit its debt limit, and the Treasury Department is using typical «extraordinary measures» to continue paying the nation`s bill.

The Congressional Budget Office has said the date at which the debt ceiling will have to be raised or the country will begin defaulting on its obligations will come sometimes between mid-November and mid-December.

It`s crystal clear; if you spend more than you earn, you need to borrow. If not, you have start to sell some assets. Not only governments, but also companies and private persons need to do that. The U.S Government have deficit, if the spending is greater than tax collections.

At the same time, companies earn less and pay less in taxes, which means less money to the government, and here is the key. In times like this, the government need to increase government spending in order to stimulate the economy and in a short-term the result will be a deficit.

The Fed didn`t «print» money during the stock market crash in 1929. Many investors lost their money and people lost their jobs. That was probably a mistake, but this time is different. The Fed started to print money.

You can imagine how it would be if they didn`t stimulate the economy?

To compare; During the World War II, the U.S deficit in 1943 was 29,6 percent of the economy. Tax policy plays a very important role for the budget. The more tax, the more earnings. Less tax means less earnings. One of the major roles to the budget surplus of the 1990`s was tax increases. What they did is what Donald Trump is talking about now: to increase the tax rate for the highest income taxpayers.

On the other hand; major tax cuts in 2001 and 2003 were the main reason to the deficits over the last decade and todays debt. The chart below shows the size of the deficit or surplus from 1930 to 2015. 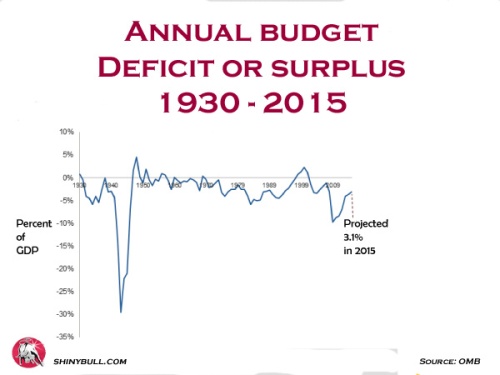 In times when the debt is bigger than the earnings, the U.S Treasury start to sell bonds to finance the debt. Everyone can buy bonds or other securities directly from the Treasury, or from banks or brokers.

For example, you can buy a 5 year bond today at $100, but you only pay $90. What you actually do is loans money to the federal government in exchange for repayment with interest at a later date. There are many different kinds of Treasury bonds, and they all represent a loan to the Treasury, and therefore to the U.S government.

When trust fund accounts run a surplus, the Treasury takes some of the surplus and uses it to pay for other kinds of federal spending. But the Treasury must pay that borrowed money back to the trust fund at a later time.

That borrowed money is called «debt held by federal accounts». 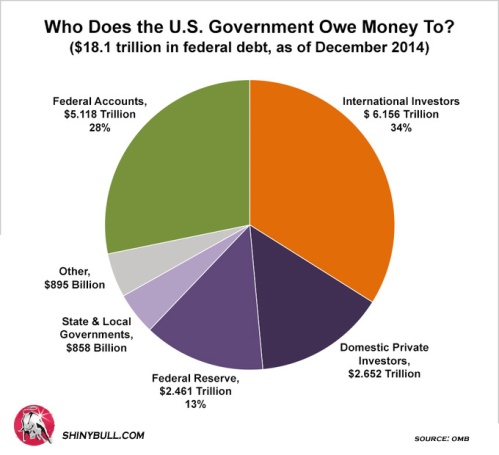 The three countries that hold the most U.S debt is China ($1,3 trillion), Japan ($1,2 trillion) and Brazil ($262 billion). Other foreign holders of national debt by oil exporting nations is Iran, Kuwait, Ecuador, Nigeria and others, $297 billion), and Caribbean banking centers like Bermuda, Cayman Island, and others, $293 billion).

The Federal Reserve buys and sells Treasury bonds as part of its work to control the money supply and set interest rates in the U.S economy.

The first overall debt ceiling was passed in 1939, and since then it has been raised or otherwise amended more than 140 times, including more than a dozen times since 2000. The debt ceiling evolved from restrictions that Congress placed on federal debt nearly from the founding of the country.

Some members of Congress have pledged to allow the federal government to default on its debt payments rather than raise the debt ceiling again, and this has been a hot issue in many years now. What they actually is doing is paying debt by another debt, and that won`t help and some argue that a deficit only shifts the burden to future generations. Others argue that deficits are necessary in tough times while a budget surplus in good times should be used to pay down the debt.

Instead of paying the debt in good times with surplus, they can use some of the surplus to government services or tax cuts.

It`s clear that many countries around the world have big challenges with much debt, but an even bigger challenge in the future can be jobs and employments.