The oil price continue to decline and brent oil is now trading at $47, and that is bad for someone and good for others. The supply in the oil-market are pushing the prices down and China will profit from that drop.

Oil tanker companies are happy for the declining oil prices and only a few months ago many of them couldn`t even cover their operating cost which is about $20,000 a day. Rates on the Asian route have gone straight up, trading at an average near $100,000 per day. Spot rates is about $60,000 to $70,000 a day.

This is a level not seen since 2008, and some of the world largest oil traders are hiring supertankers to store crude at sea, Reuters reports. In 2009 at least 100 million barrels of oil ended up being stored at sea. Some of the biggest trading firms have booked crude tankers for up to 12 months. 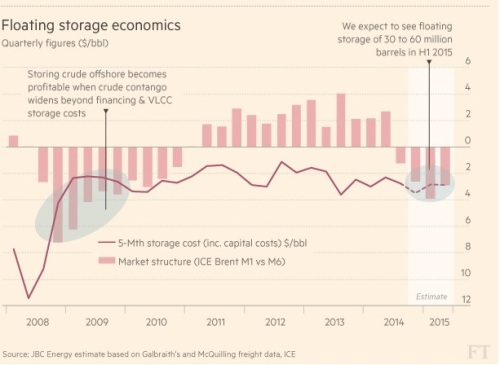 Some shipping sources consider the flurry of long-term bookings unusual and suggest that traders could use the vessels to store excess crude at sea until prices rebound. A strategy that was popular in 2009, trading gambit when prices last crashed.

The oil is floating at sea and it`s all stored on oil tankers that is waiting for the oil prices to go up again. When will the oil price turn up again and how long will those tankers wait out there in the sea?

Frontline (FRO) is up 243% in just three months amid speculation that a plunge in crude prices is spurring demand for the vessels to store cargoes. Nordic American Tankers (NAT) is up 65,1%, which owns 20 Suezmax crude oil tankers.

Frontline Ltd is a shipping company that is engaged in the ownership and operation of oil tankers and oil/bulk/ore, or OBO, carriers, which are configured to carry dry cargo. It operates oil tankers of two sizes; VLCC`s and Suezmaxes. The stock is down -11,23% so far today, so when to jump in is the big question.

It can be too early right now. The selloff in oil was sparked in part by lower estimates from Goldman Sachs, which slashed its 3 and 6 months Brent forecasts to $42 and $43 a barrel respectively from $80 and $85. Goldman also cut its longer-term estimates on Brent.

Goldman sees crude bottoming in Q2, which means jumping in now could be too early. In a report, they said $2 trillion of future oil investments are threatened due to falling crude prices. That`s up 100% from December 2014.