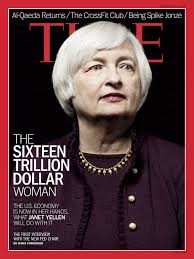 The U.S indices traded down yesterday too and Europe is also in a red territory. Most investors don`t know what to do right now. It seems to be a red opening in the U.S later today. This is all reactions on the FOMC meeting yesterday.

The Fed will probably end its massive bond-buying program this fall and probably start raising interest rates around 6 months later. This comment sent stocks and bonds tumbling. We will see a more aggressive path toward higher interest rates than anticipated she said yesterday.

The Federal Reserve has held the interest rate near zero since late 2008. They have pumped trillions into the markets with its bond purchases. All this because they tried to foster a stronger recovery. Despite the QE program, the growth has been very slow.

The change in its rate hike guidance did not mark a shift in its intentions and they will wait a «considerable time» after shuttering its asset purchase program before pushing borrowing costs higher. «Considerable time» means about 6 months.

But, as Janet Yellen said: «It depends – what the statement is saying is it depends what conditions are like».

Most people don`t know it, but the best period of economic growth in all U.S history was without a central bank. Do U.S really need Federal Reserve? They created the markets crash in 1929, and so far the FED has been a disastrous.

The FED started about 100 years ago, and since then the dollar has lost more than 96% of its value. The size of the U.S national debt is more than 5000 times larger. The Fed`s «debt-based» financial system has trapped the U.S, and are on the verge of the greatest financial crises in history.

Congress could have shut down the FED long time ago. I HATE DEBT!