The Revolution of 1848 and Europe like it is today

Euro zone have always been a danger zone, and if you look at Europe right now, it is very similar to what happened in the Revolution of 1848, also know as the Spring of Nations, People`s Spring, Springtime of the Peoples, or the Year of Revolution.

It was a series of political upheavals throughout Europe in 1848. It remains the most widespread revolutionary wave in European history. The revolution was essentially democratic in nature, with the aim of removing the old feudal structure and creating independent national states.

The revolutionary wave began in France in February, and immediately spread to most of Europe and parts of Latin America. 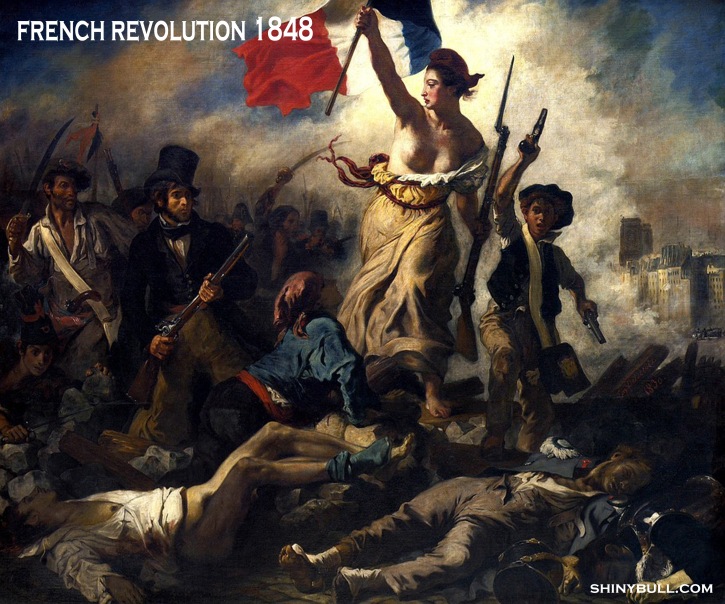 Over 50 countries were affected, but with no coordination or cooperation between their respective revolutionaries. Six factors were involved:

The revolutions were most important in France, the Netherlands, Germany, Poland, Italy, and the Austrian Empire. As with several instances of revolution in Europe previously that of 1948 was to have its major point of origin in France.

The revolution arose from such a wide variety of causes that it is difficult to view them as resulting from a coherent movement or set of social phenomena.

Technological change was revolutionizing the life of the working classes.

A popular press extended political awareness, and new values and ideas such as popular liberalism, nationalism and socialism began to emerge. Some historians emphasize the serious crop failures, particularly those of 1846, that produced hardship among peasants and the working urban poor.

Poor grain harvests, the appearance of blight. An extremely serious disease. In potato crops, and generally depressed economic conditions across much of Europe in 1845 – 1846 led to sharply rising food prices, unemployment, and a radicalization of political attitudes.

Dramatic increases in the prices of food and fuel contributed to a situation where there were serious outbreaks of hunger-related Typhus fever, causing many fatalities. Trade was disrupted as there was less general spending as food came first where the poorest classes of people struggled to keep themselves fed and everyone found the necessities of life to be much more expensive.

The levels of unemployment rose significantly. Such general economic dislocation brought with it increases in crime as persons broke the laws in their efforts to get food, fuel or cash.

Those suffering from various forms of economic deprivation lost confidence in the authorities ability to help them and became somewhat resentful of occupational groups who could be seen as profit in from the crisis. In many cases the authorities found it very difficult to receive customary tax revenues as the population had a significantly reduced ability to pay.

During this times France was yet a monarchy under Louis Phillipe but with his «Liberal» monarchy having few real supporters. Elections were held on the basis of quite limited suffrage. Only some 170,000 wealthy men, (approximately one person in two hundred of an overall French population of 35 millions), could legally vote.

Many French people felt excluded from any possibility of gaining wealth, many also felt that the bourgeois «Liberal» monarchy of Louis Phillipe compared unfavourably with earlier «Glorious» eras of French Monarchy or Empire.

Louis Phillipe dismissed his unpopular Prime Minister Guizot on the 23rd and himself abdicated on the 24th. In the wake of these dramatic developments there was an establishment of a Provisional Government of a French Republic.

On the 25th February a group of socialists, armed and carrying red flags, gathered in front of the Hotel de Ville (or City Hall) in Paris where their insistence secured a decree which proclaimed that the newly formed provisional government would undertake to provide work and would also recognise workers rights to combine.

«The Government of the French Republic binds itself to guarantee the livelihood of the workers by providing work…. it will guarantee work for all citizens. It recognises that workers may organise in order to enjoy the profits of their labour.»

The rising tide of cultural and linguistic nationalism which Europe had experienced since the later eighteenth century was marked.

The middle class began to agitate. Although Karl Marx and Fredrich Engels, working in Brussels, had written The Communist Manifesto (published in German and London on February 21, 1848) at the request of the Communist league (an organization consisting principally of German workers), once they began agitation in Germany following the march insurrection in Berlin, their demands were considerably reduced.

They issued their «Demands of the Communist Party in Germany» from Paris in March, the pamphlet only urged unification of Germany, universal suffrage, abolition of feudal duties, and similar middle-class goals.

The middle and working classes thus shared a desire for reform, and agreed on many of the specific aims. Their participation in the revolutions, however, differed. While much of the impetus came from the middle classes, much of the cannon fodder came from the lower. The revolts first erupted in the cities.

The population in French rural areas had risen rapidly, causing many peasants to seek a living in the cities. Many in the bourgeoisie feared and distanced themselves from the working poor. Many unskilled laborers toiled from 12 to 12 hours per day when they had work, living in squalid, disease-ridden slums.

Traditional artisans felt the pressure of industrialization, having lost their guilds. Revolutionaries such as Karl Marx built up a following. 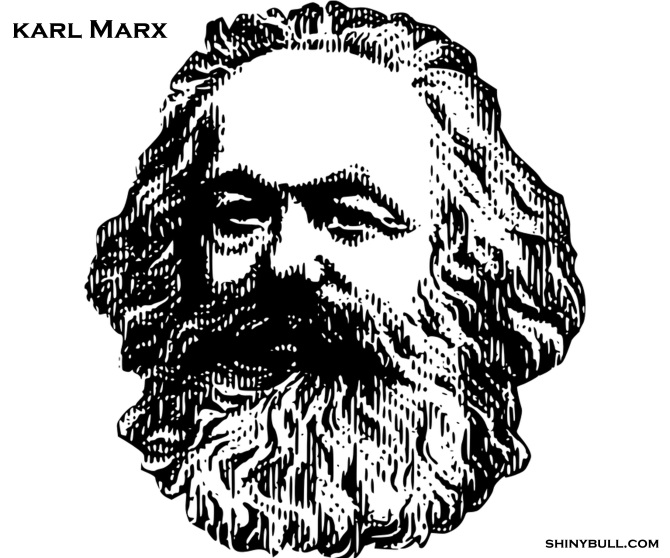 The situation in the German states was similar. Parts of Prussia were beginning to industrialize. During the decade of the 1840`s, mechanized production in the textile industry brought about inexpensive clothing that undercut the handmade products of German tailors.

Reforms ameliorated the most unpopular features of rural feudalism, but industrial workers remained dissatisfied with these and pressed for greater change.

Urban workers had no choice but to spend half of their income on food, which consisted mostly of bread and potatoes. As a result of harvest failures, food prices soared and the demand for manufactured goods decreased, causing an increase in unemployment.

During the revolution, to address the problem of unemployment, workshops were organized for men interested in construction work. Officials also set up workshops for women when they felt they were excluded. Artisans and unemployed workers destroyed industrial machines when they threatened to give employers more power over them.

Rural population growth had led to food shortages, land pressure, and migration, both within and for Europe, especially to North America. In the years 1845 and 1846, a potato blight caused a subsistence crisis in Northern Europe.

The effects of the blight were most severely manifested in the Great irish Famine, but also caused famine-like conditions in the Scottish-Highlands and throughout continental Europe. Aristocratic wealth (and corresponding power) was synonymous with the ownership of farm lands and effective control over the peasants. Peasants grievances exploded during the revolutionary year of 1848.

Despite forceful and often violent efforts of established and reactionary powers to keep them down, disruptive ideas gained popularity: democracy, liberalism, nationalism, and socialism.

The first outbreak came in Sicily, starting in January 1848. There had been several previous revolts against Bourbon rule; this one produced an independent state that lasted only 16 months before the Bourbons came back.

The failed revolt was reveres a dozen years later as the Bourbon kingdom of the Two Sicilian collapsed in 1860 – 1861 with the Risorgimento.

The «February Revolution» in France was sparked by the suppression of the campagne des banquets. This revolution was driven by nationalist and republican ideals among the French general public, who believed the people should rule themselves.

It ended the constitutional monarchy of Louis-Phillippe, and led to the creation of the French Second Republic. This government was headed by Louis-Napoleon, who, after only four years, established the Second French Empire in 1852.

The «March Revolution» in the German states took place in the south and the west of Germany, with large popular assemblies and mass demonstrations. Led by well-educated students and intellectuals, they demanded German national unity, freedom of the press, and freedom of assembly.

The uprising was not well-coordinated, but had in common a rejection of traditional, autocratic political structure in the 39 independent states of the German Confederation. The middle-class and working-class components of the Revolution split, and in the end, the conservative aristocracy defeated it, forcing many liberals into exile.

Great Britain, the Netherlands, Portugal, Spain, the Russian Empire (including Poland and Finland), and the Ottoman Empire were the only major European states to go without a national revolution over this period.

Sweden and Norway were little affected. Serbia, though formerly unaffected by the revolt as it was a part of the Ottoman state, actively supported the Serbian revolution in the Habsburg Empire.

Russia`s relative stability was attributed to the revolutionary groups’ inability to communicate with each other.

Switzerland and Portugal were also unaffected in 1848, though both had gone through civil wars in the preceding years (the Sonderbund War in Switzerland and the Liberal Wars in Portugal). The introduction of the Swiss Federal Constitution in 1848 was a revolution of sorts, laying the foundation of Swiss society as it is today.

General Cavaignac was invited by the assembly to continue with the exercise of sweeping powers until a new constitution was in place. In their efforts to secure social peace in Paris the authorities arranged, by law of 19 September, for the emigration of several thousand workers, with their families, to colonial north Africa as agricultural settlers.

A budget of 50 million francs, an enormous sum for those days, spread over several years, was put in place to fund the programme.

Several «french» adminstrative Departments were established in colonial North Africa with an expectation that their politically enfranchised, (i.e. Mainly french colonial), inhabitants would receive rights of representation in the National Assembly.

Europe today is far away from the Revolution of 1848, but many young people feel the same as people did about 150 years ago. They feel that the system is hopelessly anachronistic. They feel in crushes creativity, and they feel that they are being undone by new technologies and lifestyles.

Just like 1848, there is optimism, but at the same time it is also fear of religious, ethnic or nationalist forces unleashed. Everything is going in cycle, and the time we`re living in now is similar to the year of 1848.

Tagged as Europe, revolution of 1848