Digital Ally skyrocketed yesterday, up +45,2%. What a jump! The market cap was just $28M before the big jump, but now it`s up $40M. This big jump comes after the White House announced it`s providing $75M in funding for the purchase of 50K body cameras by U.S police departments. There are currently 750K police officers in the U.S. 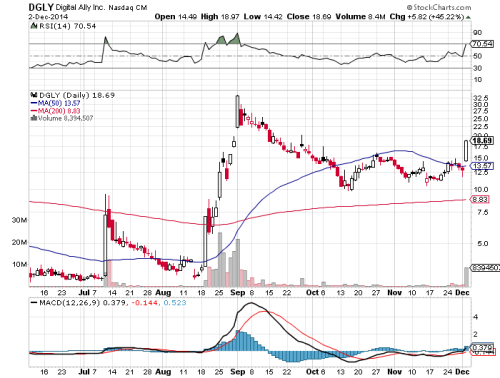 The White House`s program provides matching funds for local and state agencies buying body cameras, and that`s a similar program for vests which has led to over 1,1M vest purchases. Police Foundation president Jim Bueermann said; “In five years, this will be ubiquitous. It will be more unusual to see officers not wearing a body cam than wearing one”.

The main reason for all this is the death of Michal Brown in Ferguson, Missouri. It is a tragedy. A young teenager died. Shot by a police officer, and whatever your opinion, the riots and destruction that followed the grand jury`s descision not to indict the police officer who shot him have ravaged businesses and upended lives.

The result is that tensions between law enforcement officials and the communities they serve are higher than they`ve been in decades. Whatever you belive happened to Michael Brown when he was killed, it would be without a doubt that the evidence would be strengthened if there were a video camera on the officer.

President Obama has proposed a $263 million solution over the next three years, and it`s just a matter of time before we see police officers and other law enforcement personnel in the U.S fitting cameras.

What a great idea!

There will be a radical reduction in the use of police force and citizen complaints against the police when you have video from the event to prove the evidence. Police officers and other professionals will be more polite when they know that the video-camera is recording.

What kind of fool can be against surveillance like that? No one I guess, and that`s why investors have reacted quickly to the news right now.

Another company that can profit from this is Taser (TASR), which is known for their taser guns. The non-lethal weapons that police use to incapacitate suspects. It accounts for over 90% of the firm`s revenue.

But they has another business, and that`s police cameras. The good part of this story is that their business includes independent cloud storage of footage and data collected on cameras. A third-party will store the data, and that will reduce the cost, and it will reduce suspicions that when police misbehave, the evidence will «mysteriously» get lost.

It seems like an expensive stock as it trades at over 60 times earnings, but this it is an exception and could be worth it. There`s plenty of room for the stock to rise.

Taser is one of the few number of companies who will benefit from this trend. That company looks better than Digital Ally with better market position and a better management.

Another large players among Digital Ally is L-3 Communications (LLL). They are too big for their stocks to fully benefit, so Taser is the only company out there that`s already worked through difficult issues like privacy and data security concerns. What about GoPro? They know what action camera is…..