Strong Jobs report is on the way

Mario Draghi is the man. What a stock rally  yesterday, and all this thanks to one single man: Mario Draghi from the ECB (European Central Bank). He started to cut all three rates, and said he will also start a new QE program if necessary.

All this is done because they want action in the markets. As you know, there are millions of people in the EuroZone which is unemployeed. It`s not good for the economy because their buying power remain weak.

But what about the U.S? Later today, we will se important reports about Nonfarm Payrolls and Unemployment rate. All investors are waiting for those reports at 8.30 a.m. This is very important news, so what can we expect?

Several surprisingly healthy economic indicators reported within the past month including auto sales figures and the most recent jobs numbers indicate that commerce may be picking up. The really big question that will be answered later today is whether growth in the laber market kept up its pace through May. 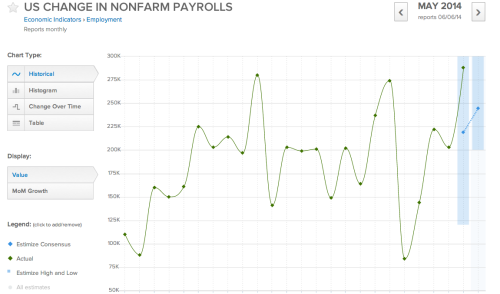 According to AutoData, the car sales spiked to an annualized rate of 16,8 million units in May. This is the fastest rate of growth seen in the auto market in 7 years! GM doubled sales growth and reported a 12,6% gain compared to estimated 6,4%.

The automotive data is encouraging, but the nonfarm payrolls change is the indicator investors really keep a close watch on later today. The change in nonfarm payrolls may be the most influential economic indicator (other than perhaps GDP) because it`s reflective of two key factors for the national economy.

The jobs number tells us both about the strength of corporations and their willingness to spend cash to expand their businesses. It also gives insight into the number of newly added employees which may bolster consumer spending with their freshly minted paychecks.

Todays jobs report also contains supplementary information about employee earnings levels and the unemployment rate, which isn`t considered to be as clear of a signal because it is positively influenced when job-seekers drop of out the labor force in what is known as the discouraged worker effect.

The U.S change in nonfarm payrolls unexpectedly climbed from 203k jobs added in March to 288k in April. The markets around the world rallied after those news. Later today we will see the May jobs data.

On todays report Morningstar has the nonfarm payrolls change consensus at 220k jobs added while the consensus from Estimize is 10% higher at 243k. Morningstar also indicate that the unemployment rate may rise slightly to 6,4% while Estimize are forecasting that unemployment will remain unchanged at 6,3%.

The Estimize community is expecting the number of jobs added in May to be considerably less than the number added in April, but the community is still optimistic that the labor market will outperform predictions from the majority of economists.

All eyes on the Labor Department`s report today at 8.30 AM EST.