OPEC meeting in Vienna on thursday

OPEC is having a very important meeting on thursday and that can move the oil markets. The 12-member group is bickering over who should cut oil output, and by how much in order to pump up the prices. The meeting in Vienna is the groups most watched session in many years.

The U.S oil shale revolution is a game changer. (Read my article titled; American shale revolution – from January 27, 2014). The oil supply have increased and the oil prices is declining, and that have opened up the market. Countries that once had to submit to OPEC`s prices can now look for other suppliers. The oil king is about to lose.

China`s demand for oil will continue to increase as its population is growing and so are the demand for oil-related items such as cars, plane traffic and motorcycles. As the U.S oil shale production makes the country more self-reliant, China has become more important to OPEC.

OPEC has a monopoly on the market and China pay about 10% more for the oil than the market price. As the oil prices plunge, many other suppliers in other countries will vie to undercut that monopoly. OPEC is slowly losing its second biggest customer as China now can pursue oil from countries outside of OPEC such as Brazil, Venezuela, Colombia and some countries in Africa.

This is just the beginning. China bought a lot of oil from Colombia this year, and China Petroleum and Chemical Corp (SNP) processed oil from Brazil`s Ostra field for the first time earlier this year. OPEC`s shipment to China fell 11% and the average cost per barrel was 10% lower.

China`s oil production and oil refining companies will benefit from the changing import sources. They`re already bumping up their refining capacity and shooting for a 20% increase in the next 5 years, and there`s a little doubt that China will purchase more crude oil from Russia as the West deepens their economic sanctions. The sanctions on Russia have led to increase China`s purchases from its communist brethren by about 60% in September. 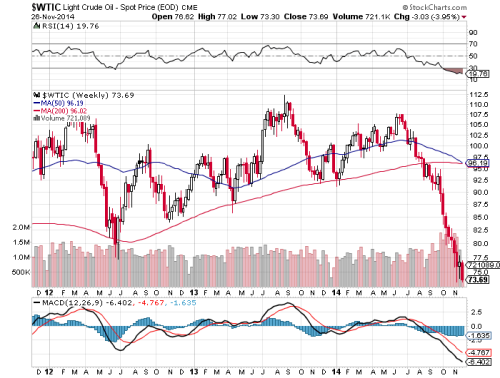 The energy sector is the worst performing sector in the S&P 500 this year, but the shift started years ago, so what we see today should not be a surprise for some one. It started in 2008 when Crude oil peaked at $147 a barrel, but the oil price have plummeted to about $73 a barrel now.