20 years since the Swedish DJ, Remixer, Producer and Songwriter Denniz Pop past away

Sweden is one of the biggest music exporter, and Denniz Pop is the main reason for that. Denniz Pop made hit after hit after hit, but suddenly it all stopped in 1998. Tragically he left us all very early in August 30, 1998 after less than a year of struggle against his stomach cancer.

Denniz Pop`s real name is Dag Krister Volle and his nickname was Dagge. He was born on 26 April 1963 to the Norwegian immigrants Jarl Gregar Volle and Anna Volle (neè Innsto). 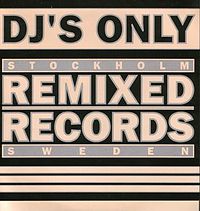 (This is how one of the first SweMix record labels looked like in the 80`s. I have many of them in my own record collection. Good memories)

Much people around the world doesnt know who Denniz Pop is. They have never heard of him, but thats how he liked it. He didn`t want to stand in the spotlight, and very few in Main Stream Media wrote about him.

He started his career as a DJ in the early 80s in Stockholm and he quickly became one of the most well-known DJs in the Stockholm dance scene, and he was a great inspiration to many new DJ`s and to some he was probably THE reason they wanted to become a DJ.

People wanted to do all these great things that Denniz Pop was doing, Another famous Swedish DJ was Robert Watz, who is one half of the successful RobnRaz. He said Denniz Pop was the inspiration and the best disc jockey in Sweden!

In 1985, Denniz Pop and Robert Watz came up with the idea of creating a remix service like DMC (Disco Mix Club), and a year later they started SweMix which was founded by Denniz Pop, Renè Hedemyr (Remixer of Roxette), Stonebridge (the man behind Robin S and Show me love), Emil Hellman (Army of Lovers), Rob Below and JJ.

Denniz Pop fast became one of Swedens most wanted remixers. He always had this ear for how things should sound to be perfect and in his remixes he could put in a small sample of another record. As a former DJ I can remember his remix of Michael Jacksons Billy Jean, which he used time stretching.

In 1989 SweMix started to sign own artists and the company was divided into SweMix Records & Publishing and SweMix Productions. Dr Alban was one of the first artist to be signed and his debut single «Hello Africa» became a worldwide hit.

Dr Alban and Denniz Pop became famous all over the world and there is no doubt that it is because of Denniz Pop. He knew how it should sound like. Now, they started to earn a lot of money. About 50% of the income went to SweMix and the rest of the crew who were just sitting there drinking coffee. That wasn`t fair.

Denniz Pop didnt like that, so in 1992, SweMix splits up when Denniz Pop and Tom Talomaa startes their own record label called Cheiron. This is were things really starts to be big. Really big. Denniz Pop produced Dr Albans second album called «It`s my life».

The song «It`s my life» became a MegaHit. So was it for “No Coke”, “One love” and “Sing Hallelujah”, and Denniz Pop became a big name in the business and got lots of offers to produce and write music for other artists. A year later he produced Ace of Base and made the song «All that she wants».

It doesnt stop here. A year later he produced hits after hits for E-Type and Leila K. Later on, he made MegaHits for Backstreet Boys. He made a hit for Robyn, Papa Dee, Army of Lovers, Rednex, Real McCoy and Michael Jackosons nephews 3T album, while he also worked with Michael Jackson in the studio.

In 1998 he receives his first Grammy award (Swedish Music Industry Award). He got the jury`s special Honor Award, for all his great work and successes which placed Swedish Dance Music on the world map and have made Sweden the Third largest music exporting country in the world, after U.S and U.K.

Denniz Pop was too ill to receive the award in person because of his cancer, but everyone agrees to the fact that he was worth it, and people said;

«Denniz Pop was THE reason that the Swedish Dance Music became such a big export.»

Denniz Pop got the information in December 1997 that he had cancer and he was operated just weeks later. He was quite well until July 1998 when he very fast got worse and sadly past away on Sunday August 30, 1998. Thats excatly one year after Princess Dianas death.

It’s nice to hear how Max Martin keeps Denniz Pops memory and their special sound alive in worldwide hits. He made Britney Spears «Baby one more time» and during the 1999 MTV European Music Awards, Britney dedicated that award to the loving memories of Denniz Pop.

Britney Spears also had the following dedication to Denniz Pop in her album called «Baby one more time»;

To Denniz Pop; Your memory lives on in the beautiful music you wrote for me. Thank you.»

In 2016, Denniz Pop was honored and elected into the Swedish Music Hall of Fame. The Jury motivated the election;

«Denniz Pop; Sweden has during the past 25 years positioned itself as the world`s leadin country for pop music along with the US and Britain. A large part of this development can be traced to one single person; Dag «Denniz Pop» Volle (1963-1998) from Botkyrka Municipality. Denniz Pop was a record store clerk and disc jockey who transferred his youths intensive music listening (what makes certain songs catch?) and dance floor studies in the field (what makes people dance?) to, without playing any instrument, start creating his own music with the help of initially record players and then computers.

Denniz Pop created a new way to make music. A non-hierarchical teamwork with different specialists called in. An operation method that changed and shaped today`s international pop music. One of Dennis Pop proteges, Martin «Max Martin» Sandberg, became the most successful pop-maker in the world since Paul McCartney and John Lennon. Everywhere on the radio today, echoes are heard of Denniz Pop.»

It is also nice to see that in 2013, Denniz Pop Awards was founded and it`s run by former Cheiron members, co-workers, friends and family with the goal of helping new songwriters, producers and artists continue the legacy Denniz Pop once started.

Every year the Award is given to aspiring talents in the music industry. Notable winners include Swedish House Mafia and Avicii.

Avicii is another young Swedish DJ and producer who passed away on Friday last week. Denniz Pop was 35 and Avicii was only 28 years old. Two great DJ`s. Two great producers. Both from Stockholm. Both had big success, and both of them got stomach problems that stopped their work.

I will write more about Avicii (Tim Bergling) later on.

On August 30, 2018, it is 20 year since Denniz Pop past away. I really hope former SweMix and Cheiron members along with others in the Swedish Music Industry can find a moment this year to honor Denniz Pop.