Is this the end of the bull market?

The bull market is 11 years old on Monday, and it is the longest stretch of non stop gains ever. The sell off over the past 12 trading days means that the US stocks are on the edge of a bear market. Therefore; Tuesday will be a test.

If the market goes below 20%, the bull market will officially be over, and we are entering a bear market. After the Great Recession, the bull market started in March 2009. The S&P 500 has gone straight up since then.

The S&P 500 is up 339% and it has been a slow recovery. It`s similar to the recovery from the Great Depression in June 1932 were the S&P 500 skyrocketed 325%. At that time, it was the deepest recession in modern American history.

President Franklin Roosevelt supported the bull market with massive government spending. Later on, Roosevelt pulled back from the program and the Fed tightened its reserve ratios for banks. The economy didn`t recover as much as it should, and tighter monetary and fiscal policy led to a double-dip recession.

This is why the Fed is important now. So are the Trump administration. The Fed cut the rates 50 points only days ago and they will probably come up with more news about the market even this week.

What they do now is great leadership on the world stage. They can`t stop the virus but they can make liquidity.

To contact the author of this story: Ket Garden at post@shinybull.com

Federal Reserve Board Chairman Jerome Powell announced on Wednesday that it kept the benchmark interest rate unchanged. The statement comes after a two-day meeting of the FOMC, which decides on monetary policy.

Powell said the job market would remain strong and inflation would stay around the 2 percent target for “several years.” This is great for the U.S because it gives the Fed some tools to use if the trouble are coming back. But what about the rest of the world? Are they healthy?

The picture is different in Switzerland. The Swiss National Bank kept its benchmark three-month Libor at -0,75 percent on June 21st, 2018. Interest rate in Switzerland reached an all time low of -0,75 percent in January of 2015, and it`s still at the same low-level. But they are not alone.

Denmark followed Switzerland in 2015 and dropped the interest rate to -0,75 only a month after them. The Danish central bank follows the path set by the ECB and the key rate will be raised or lowered when the ECB changes the refinance rate.

The Danish central bank`s main policy aim to hold the euro`s exchange rate within 2,25 percent either above or below 7,46038 kroner in an effort to keep inflation low and provide stability for exporter. Now the Danish rate is -0,65.

Sweden joined the negative interest club, and the central bank of Sweden held its benchmark interest rate at -0,5 percent on July 3rd, as widely expected, saying monetary policy needs to continue to be expansionary for inflation to remain close to target despite strong economic activity.

Japan is the last country in the world to have negative interest rate. They reached an all time low of -0,1 percent in July this year. The BOJ vowed to keep rate extremely low for extended period of time and opted for flexible bond buying at its July 2018 meeting.

In other words; you are lending your money to governments and you are paying them interest for that, which mean it`s cheaper to put your money under your mattress. But that strategy can be very risky.

The goal is to make people spend money rather than pay a fee to keep it safe. This is intended to incentivize banks to lend money more freely and businesses and individuals to invest. This is how you make growth.

During deflationary periods, people and businesses hoard money instead of spending and investing. The result is a collapse in aggregate demand, which leads to prices falling even further. This again will lead to a slowdown in production and output which means higher unemployment.

Negative interest rates can be considered a last-ditch effort to boost economic growth, which means when all else has proved ineffective and may have failed. 21 countries like Spain, Italy, Greece, France, Finland and Malta to name a few, are holding its interest rate at 0,00. The Euro zone is joining the club.

In 2014, the ECB instituted a negative interest rate that only applied to bank deposits intended to prevent the Euro zone from falling into a deflationary spiral.

The ECB held its benchmark refinancing rate at 0 percent on July 26th and reiterated that the monthly pace of the net asset purchase will be reduced to €15 billion from September to December 2018, and will then end.

The ECB expect the interest rate to remain at their present levels at least through the summer of 2019, and in any case for as long as necessary to ensure the continued sustained convergence of inflation to levels that are below, but close to 2 percent over the medium term.

All the worlds central banks are printing money like never before, and this is for the first time in history. The balance sheet assets of the six major central banks have just hit a new all-time record high of $17,3 trillion. Thats up from $4,987 trillion in May 2006.

People`s Bank of China (PBOC) has the largest balance sheet with total assets of $5,0 trillion, followed by the Federal Reserve with $4,4 trillion. 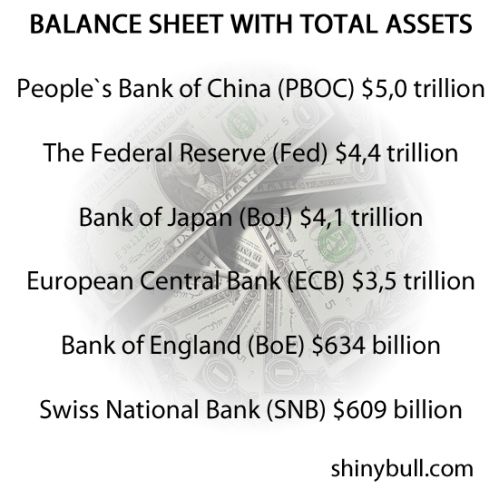 Trumps goal is massive growth, and IMF in January raised its economic growth forecasts to 2,3% in 2017 and 2,5% in 2018, thanks to Donald Trumps plans to cut taxes and boost infrastructure spending. The World Bank will follow IMF with similar forecasts.

Trump`s bold plan is to create 25 million new American jobs in the next decade, which means it will only take 2% annual growth of the workforce to hit that target. Data shows us that 25 million jobs have never been created in a 10 year timeframe.

I do not agree with Trump`s immigrant policy, but there is a drawback here; If Trump want to reach his goal, he need immigrants, because the number of people who are working dropped 3,7% over the past 10 years, and some of the reasons for that is the baby boomers demographic shift.

Janet Yellen also said she consider to hike the rates because the economy is improving. The Fed want to proceed with «normalizing» monetary policy, which means they want to have room to ease in case of a future shock.

President Donald Trump can help them to solve their fiscal policy by cutting tax rates and spend more money on infrastructure. At the same time, he need to keep the lid on federal spending. Will Donald Trump succeed? Betting against him have so far been a bad decision.