Wow. This is a bombshell. And German Chancellor Angela Merkel is shocket. So are the majority of the German citizens. Germany`s ruling party Christian Democratic Union (CDU) will lose almost half of their votes in case of a new elections in the state of Thuringia.

The right-wing to far-right political party in Germany Alternative for Germany (AfD) are on the rise. A party founded only seven years ago. Autraged critics have compared the Thuringia election with the rise of Adolf Hitler.

In 1930, Adolf Hitler was celebrating. «Our biggest success we had in Thuringia,» he wrote. There we are the most significant party. The parties in Thuringia trying to create a government cannot secure a majority without our co-operation.»

A poll released earlier today, Friday, revealed that CDU is dropping from 21,7 percent to 12 percent.

Ex-Prime Minister of Belgium and pro-EU Guy Verhofstadt protested and sent a message on social media on Friday. He released a photograph of a newly elected Mr Kemmerich shaking hands with Thuringia`s hard-right AfD leader Bjorn Hocke, and juxtaposing it with one of Hitler greeting the then German president Paul von Hindenburg.

The AfD`s initial supporters were the same prominent economics, business leaders, and jornalists who had supported the Electoral Alternative 2013, who had previously challenged the constitutionality of the German government`s eurozone policies at the Federal Constitutional Court.

According to its interim electoral manifesto, the party is against same-sex marriage and favours civil unions. The party is also against adoption for same-sex couples. The left-leaning newspaper Die Tageszeitung described the group as advocating «old gender roles».

Wolfgang Gedeon, an elcted AfD representative, has included feminism, along with «sexualism» and «migrationism», in an ideology he calls «green communism» that he opposes, and argues for family values as part of German identity. As AfD has campaigned for traditional roles for women, it has aligned itself with groups opposed to modern feminism.

Thomas Kemmerich of the Free Democratic Party (FDP) was elected as the state prime minister of Thuringia with the votes of the CDU and the right-wing Alternative for Germany (AfD) on Wednesday.

Many people believe that Kemmerich`s election with the help of the AfD would have effects beyond the state and endanger the stability of the political system in Germany.

After Kemmerich`s election, leading politicians of most German parties critized process and called for a new elections in Thuringia. On national level, all major parties have shunned cooperation with the AfD.

Bernie Sanders announced earlier today that he is running for presidency 2020. He is a democratic socialist on the left side who is fighting against president Donald Trump who is a Republican, businessman and a capitalist on the right side. Left vs Right. Socialism vs Capitalism.

President Donald Trump had a very strong and powerful state of the union speech a few days ago. In the speech, he made it clear that the U.S will never be a socialist state. The contrast between Donald Trump and Bernie Sanders could not be clearer.

Bernie Sanders said in his speech on Tuesday that people are living in a pivotal and dangerous moment in American history. Furthermore, he said «We are running against a president who is a pathological liar. A fraud. A racist. A Sexist. A Xenophobe, and someone who is undermining American democracy as he leads us in an authoritarian direction.

This is exactly what the «hate Trump media» have told us in years now and Mr Sanders obviously share this ideas.

He said «I am running for president because now more than ever we need leadership that brings us together. Not divides us up. Women and men, black, white, latino, Native American, Asian American, gay and straight, young and old, native-born and immigrant; Now is the time for us to stand together.»

«I`m running for president because we need leadership that will fight for working families and the shrinking middle class. Not just the 1%»

«We need a president who understand that we can create millions of good-paying jobs. Rebuilding our crumbling infrastructure and constructing the affordable housing we desperately need.»

«I`m running for president because we need trade policies that reflect the interest of workers and not multinational corporations. We need to raise the minimum wage to a living wage.”

«I`m running for president because we need to understand that artificial intelligence and robotics must benefit the needs of workers. Not just corporate America and those who own that technology.»

At the end of the speech, Mr Sanders said; «together we can create a nation that leads the world in the struggle for peace and for economic, racial, social and environmental justice. And together, we can defeat Donald Trump and repair the damage he has done to our country.»

President Donald Trump are working hard to make America great, but according to Bernie Sanders, he have destroyed the country. Whaaaaat?

Emmanuel Macron has 62% of the vote while Jaques Chirac had 82,2% against Marine Le Pen`s father in 2002

People in France are at a very critical moment as they need to vote for a pro-European liberal or a far-right challenger. Voters in France will not only vote for France`s future but also for its place in the European Union.

Whats so special about this election is that the Socialist party and the center-right that have run France since the 1950s is out of the game with their old models. No matter what the winner is, the new President of France will have an agenda for change.

So, who is the next President of France? 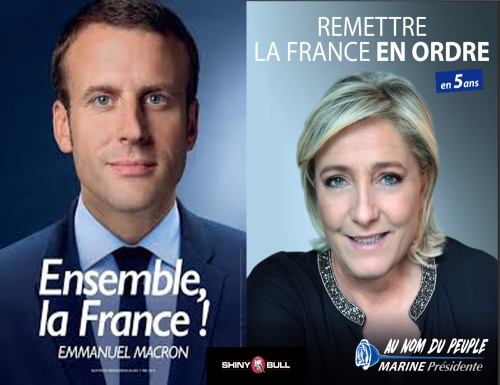 The difference between Macron and Le Pen is that Macron want to stay in the European Union and Le Pen want to get out as soon as possible. They talked about it in a TV debate earlier this week. Emmanuel Macron also had this to say about Le Pen and her right-wing party:

“The France I want will not be divided. To make that happened we will need to leave a system that produced them. You are the co production of the system you are denouncing because you living thanks to it. You are its parasite!”

Wow! That was heavy stuff. «War declared» was also the headline in front of the newspaper in France earlier this week, and that was a message from Ms. Le Pen. There is no doubt; there is a war out there. The globalists vs The Populists.

Its a Populist wave in Europe, but we saw in Netherland that the Populists are still a minority. People in Netherland didnt want them. The latest poll in France is telling us that Macron will win by 62% which is a big victory.

But its not as good as Jacques Chiracs victory in 2002. He won 82,2% of the vote against the far-right candidate Jean-Marie Le Pen, which is the father of Marine Le Pen.

Chirac`s internal policies initially included lower tax rates, the removal of price control, strong punishment for crime and terrorism, and business privatization. After pursuing these policies as Prime Minister in 1986 – 1988, he changed his method.

He argued for more socially responsible economic policies, and he was elected in 1995 after campaigning on a platform of healing the “social rift” (fracture sociale).

Then, Chiracs economic policies, based on dirigisme, state-directed ideals, stood in opposition to the laissez-faire policies of the United Kingdom, which Chirac famously described as "Anglo-Saxon ultraliberalism". Chiracs religion is Roman Catholicism just like Emmanuel Macron.

There is a war going on and some of the weapons is «fake news». During the heated and sometimes vicious TV debate, Le Pen told Macron she hoped “we will not find out that you have an offshore account in the Bahamas”.

That was a reference to documents circulating on the internet that linked Macron to a Caribbean bank and was easily identifiable as forgeries. Macron swiftly rejected the comment as «defamation».

Paris prosecutors have launched a preliminary investigation into whether the fake news was being used to influence Sunday`s election runoff. Are we facing the same tactic as we saw during the American election?

“Macron came to Greeces aid during our crisis. The left should back him, Yanis Varoufakis said. Former President Obama said: «Im not planning to get involved in many elections now that I don`t have to run for office again, but the French election is very important to the future of France and the values that we care so much about”.

He added: “I have admired the campaign that Emmanuel Macron has run. He has stood up for liberal values. He put forward the vision for the important role that France plays in Europe and around the world. And he has committed to a better future for French people. He appeals to people`s hopes, and not their fears.”

I look forward to Sunday.