I have been watching Ambarella for a while and the stock has gone straight up, but that`s until now. So far, 2015 has been a bad year for Ambarella, but despite the huge drop, the stock is still up for the year and even better than S&P 500.

The stock is down over 50% in a few months and the stock has so far been very speculative. The company has profited from GoPro`s success, but as you may know, GoPro has been losing market shares with weaker earnings and guidance for the future. 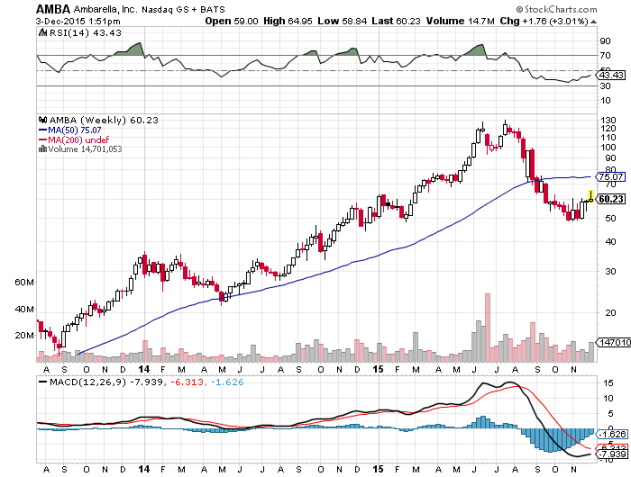 When GoPro missed its guidance for Q3 and told investors a forth-quarter to decline nearly 20% YoY, Ambarella’s shares was also declining. Investors are linking those two companies but that can be a mistake.

But GoPro is not the only customer in the market. The chipmaker has another big opportunity, which can be bigger than GoPro. The new big market is the drone industry, and if you saw my article about Amazon`s new drones, you know that this can be big business.

A green signal from the Federal Aviation Administration will open up a huge market for drones, and Ambarella’s high-end camera chips. The demand for drones with camera will not only increase in the defence industry (U.S Department of Defence) but also by ordinary consumers at Wal-Mart Stores and Amazon to name a few.

In addition to their wearable-cameras space, Ambarella’s revenue comes from IP Security and automotive, but that can change in the future. Their biggest competitor in the drone market is probably Aero Vironment, but they are not diversified like Ambarella, while they are focusing just on one segment which is drones.

The stock is trading at $60 on Wednesday, which is down from record high of $129,19 in July. GoPros demand for drones in not what investors expected and many are bearish at the moment. The drone market hasnt started yet and Ambarella can be a good investment for long-term investors.